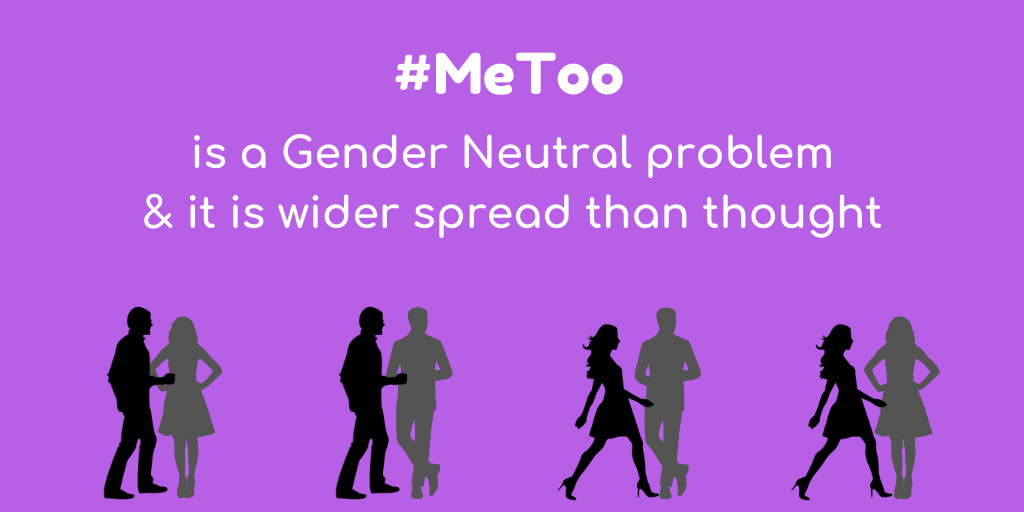 #MeToo is a woman's thing. Man doing bad things to the weaker women.

​Well this is as wrong as it gets. I myself have been a victim of it and I personally know of one another man who has been as well at young age. I do not know personally more man at the moment of writing this (02-09-2018) as it is not a subject man feel confident enough to talk about it.
And this is exactly one of the major problems.
Both men and women are not easily talking about this, let alone coming-out about it. It is more accepted to come out of the closet (saying that you are gay or bisexual)  than saying that you are or have been a victim of sexual abuse.

#metoo cases spread across all
​cultures, races, social classes, religions, ages
and on all inhabited continents.

Sorry to disappoint: It's everywhere!!!!!!
At Schools, High Schools, Colleges, Universities, Sports Clubs, Youth Centers, Community Centers, Boy Scouts, The Military, Small Companies, Large Companies, Multinationals, Government Institutions, Membership Clubs, Religious institutions, you name it. Even between Friends and Family Members.
​
Yes, some areas and industries are more susceptible to it than others. But this does not exclude any other field.
​
Below is an article that I came across by accident, although I do not believe in chance. It is about a famous man who has come out publicly and under oath about being sexually harassed. There is a short clip of the testimony in the middle, reactions of some prominent figures and at the bottom of the page I'll include the video of the full hearing at the US  Senate.

This article is from www.glamour.com and written by Michael Arceneaux August 27, 2018
​
If We Want Men to Be a Part of #MeToo, We Have to Stop Gendering the Movement
In May, director and actress Asia Argento took the podium at the 71st Cannes Film Festival to shake the table. “In 1997, I was raped by Harvey Weinstein here at Cannes. I was 21 years old. This festival was his hunting ground,” she explained. To anyone in attendance who had mistreated women, Argento declared, “You know who you are, but most importantly, we know who you are, and we are not going to allow you to get away with it any longer.”
Argento, who six months earlier had detailed her experience with Weinstein in a bombshell story in The New Yorker, was a well-established voice in the #MeToo movement. But now she's joined the list of the accused; The New York Times reported that the actress “quietly arranged to pay $380,000 to her own accuser: Jimmy Bennett” and quoted documents that alleged that Argento sexually assaulted Bennett, an actor and musician, in a California hotel years ago. Bennett was only two months past his 17th birthday at the time; Argento was 37. (The age of consent in the state of California is 18.)
Bennett declined to be interviewed by the Times, but in a statement to CNN,  afterward he acknowledged that he had delayed speaking out about the incident in hopes of handling it privately. The truth is, most men are forced to handle assault or harassment "privately"—men are not allowed to be victims. In fact, men praise boys when they are sexually assaulted by older women. It's embedded in our slang (cougar, MILF) and our pop culture influencers. It’s why Chris Brown, in a 2013 interview with The Guardian, proudly declared that he lost his virginity at age 8. (“It’s different in the country,” the Virginia native said to justify the actions of the teen girl. “So at 8, being able to do it, it kind of preps you for the long run, so you can be a beast at it. You can be the best at it.")

If we want men to be a part of the #MeToo movement, we need to acknowledge that they too can be victims.

​It’s why Terry Crews, who came forward in October and publicly accused a Hollywood executive of groping him, was mercilessly mocked by rapper 50 Cent on Instagram. (In front of a Senate Judiciary Committee hearing  for the Sexual Assault Survivors' Bill of Rights in June, Crews discussed this toxic masculinity, saying manhood “tends to be cultish,” and denouncing the “complicit system” that encourages men to protect one another and shame those who speak out.)
Bennett's statement echoes that idea: “At the time I believed there was still a stigma to being in the situation as a male in our society,” he said.
And Argento, in her response, did as the accused so often do—she sought to discredit, disparage, and censure the survivor.

​“I have never had any sexual relationship with Bennett,” Argento said in a statement sent to journalist Yashar Ali. “Bennett—who was then undergoing severe economic problems and who had previously undertaken legal actions against his own family requesting millions in damages—unexpectedly made an exorbitant request of money from me.”
​Argento went on to say that her then boyfriend, Anthony Bourdain, "decided to deal compassionately with Bennett's demand for help and give it to him."
The actress was immediately, and rightly in my view, criticized. Argento’s decision to portray her accuser as a grifter or gold digger is a familiar trope employed by powerful men when women accuse them of sexual assault and misconduct. The kind that makes other victims not want to speak out over fears of their character or their work will be slandered. Considering Argento’s role in the #MeToo movement, she knows better than anyone why such a line of defense is troubling. It’s one thing to defend yourself, but why do so in a manner that mirrors the kind of men who have caused so many women pain? 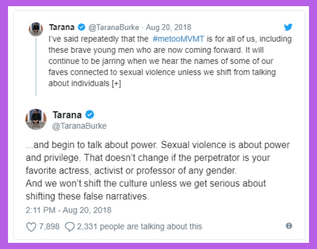 Thankfully, leaders like #MeToo creator Tarana Burke reiterated what I felt had long been made clear: Men have a space in the movement too.
Taking to Twitter, Burke wrote: “I’ve said repeatedly that the #metooMVMT is for all of us, including these brave young men who are now coming forward. It will continue to be jarring when we hear the names of some of our faves connected to sexual violence unless we shift from talking about individuals and begin to talk about power.”
Click the picture to go to the original tweet.
We all need to absorb this truth: Although men commit most acts of sexual assault and rape, men are sexually assaulted and raped too. Their assailants can be men or women. #MeToo is not about gender, it's about power.
Our culture, and the toxicities of masculinity and patriarchy, lead some men to believe they are entitled to do what they want with women’s bodies. To leer, grope, force, no matter what age, profession, protestation. Some women end up repeating the mistakes of these men. If we truly want to move forward together, we have to recognize—I'll say it again—that sexual assault and rape are about power, and that this despicable behavior impacts all of us.

MeToo started with a simple idea: Believe the women. We need to believe all victims. Respect them. We need to give them space to tell their stories.

​Michael Arceneaux is a writer in New York City and author of the New York Times best seller, "I Can't Date Jesus."

Recording of the full hearing at the US Senate: